Camila Cabello kick started the Billboard Latin Music Awards and used her platform to spread a simple but important message.

Global pop star and a vocal artist about world topics of interest in a glittery black dress with long black gloves covering her hands,kicked off the event with a hot and powerful performance of her hit song ‘Don’t go yet’, which sat in top 50 of Hot 100. 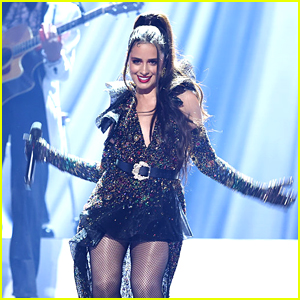 Even more note worthy, Camila used the platform to speak her message, After calling the end of tyranny in Cuba, she pumped her end in air with the feeling of precious freedom and shouted “patria y vida.” The phrase is a new take on Cuba’s country slogan “country or death” translating to “Country and life.”

The phrase was popularized by singers Yotuel, Gente de Zona, Descemer Bueno and Maykel Osorbo this February when the artists released “Patria y Vida,” This was met with harsh criticism from the Cuba’s Communist Party. The song has over 8 million You Tube views and after a shout out from such a high profile and well recieved artist globally, the issue is sure to get more coverage.

Camila Cabello was recently seen in Amazon Prime’s Cinderella, The musical recieved a lot of attention, And a song from the musical, which she co-wrote alongside Scott Harris , ‘Million to One’ touched many hearts. Though the movie received varied responses, ranging from Forgettable from The New York Times to ‘Inspiring’ by viewers, The movie did managed to entertain people.

Famous Punjabi Singer Balwinder Safri passes away at the age of 63; Diljit Dosanjh,…

Singer Bhupinder Singh passes away at the age of 82

Polling for Presidential Elections 2022 ends, results to be…

Bharat Bill Payment would make it easier for NRIs to pay…

Market trading in green after the RBI increased the repo…