The Kapil Sharma Show’s recent promo video showed the audience from the front row picked up and joked on.

On a recent episode of The Kapil Sharma show, Krushna Abhishek picked out an audience from the seating members and made joke about about his beard. As Krushna pulled him from his seat, the audience member was left laughing.

On the official Instagram handle of SonyTv, a promotional video was shared that opened with Krushna pulling a man from the row of the seated audience on The Kapil Sharma Show.”Waah kya, kyu Nahi. Ao(wow, why not. Come)”, Krushna said.

Krushna was then seen touching the beard of the man while saying, “Ye raise hi rakhi hain ys isme chipkali bhi rehti hai(Is this just like that, to do you also have a lizard living in there)?”.Actor Salman Khan and Ayush Sharma who were seated and present on the set were seen laughing their heart out at this while the younger actor clapped. 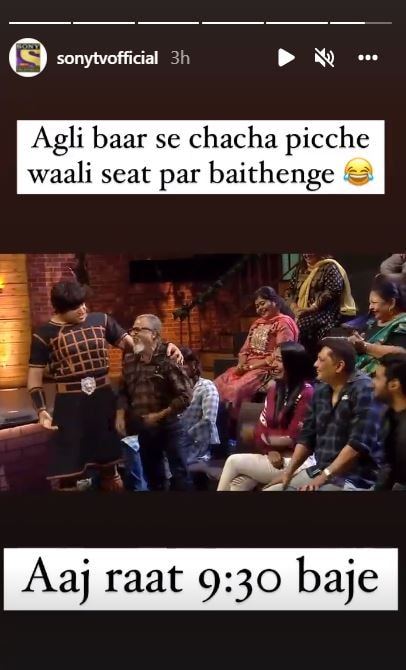 On the other hand, a separate promotional video saw Sudesh Lehri telling Salman Khan that there were three people in the film industry who is angry with him: Iss industry-main teen log aapse naraaz Hain-Ek Maine Pyaar Kiya ka kabootar, Ek Hum Aapke Hain Kaun ka Tuffy Aur Ek Ready wala Sudesh Lehri(There are three people who are upset with you, the pigeon from Maine Pyaar Kiya, the dog from Hum Aapke Hain Kaun and Sudesh Lehri from Ready).”

To this, Kapil told Sudesh,” Baaki dono toh talented hain,tu Kyun naraaz hain(The other two are talented, why are you angry)?”

From the sources of HindustanTimes, it has been known that actor Salman Khan and Ayush Sharma, made an appearance for their upcoming film Antim. Along with them, The final truth co-star Mahima Makwana and director Mahesh Manjrekar also visited Kapil Sharma’s popular comedy show sets.

Teaser of Money Heist’s Korean adaptation is out NOW!

X0PA AI RAISES $4.2 MILLION IN SERIES A FUNDING TO SCALE…

Bigg Boss 15: Netizens applaud Pratik Sehajpal on his win in…