Cricket legends and long-time friends Sachin Tendulkar and Brian Lara bonded over a video of the latter’s son whose batting grip seemed quite similar to that of the Indian great.

It is well known that two of the greatest batsmen ever in Sachin Tendulkar and Brian Lara have been friends off the field for a long time. While both played during almost the same time for their countries, the mutual respect they carry for each other is unmatched.

‘I didn’t expect it’: Sourav Ganguly recalls when MS Dhoni…

Recently Lara had shared a video of his son trying to learn how to hold the bat. On Wednesday, Sachin posted a snapshot from the video and combined it with a similar one from his own childhood.

Look at the way he grips the bat, that tells me he wants to be a lefthanded batsman. Mummy is giving him some good advice. Look at the attitude when told to switch hands. 😎😂 "Both hands on the bat" 😂 NO Action time swings right misses swings left and makes contact #donedeal #leftiebatsman "Don't you want to play like daddy" NO! 👍 #betterthan That's my boy!

@brianlaraofficial I know of another boy who had a similar grip and didn’t do too badly in international cricket. 😋

“@brianlaraofficial I know of another boy who had a similar grip and didn’t do too badly in international cricket”: wrote Sachin along with the image on Instagram.

In response, Lara reposted the photo through his own Instagram account with the caption: “I can see that @sachintendulkar and some of the best bowlers in the world felt that sword! Well I am not interfering then lol. Thanks for the advice. #rightvsleft #legend #mostruns #recordsmen.” 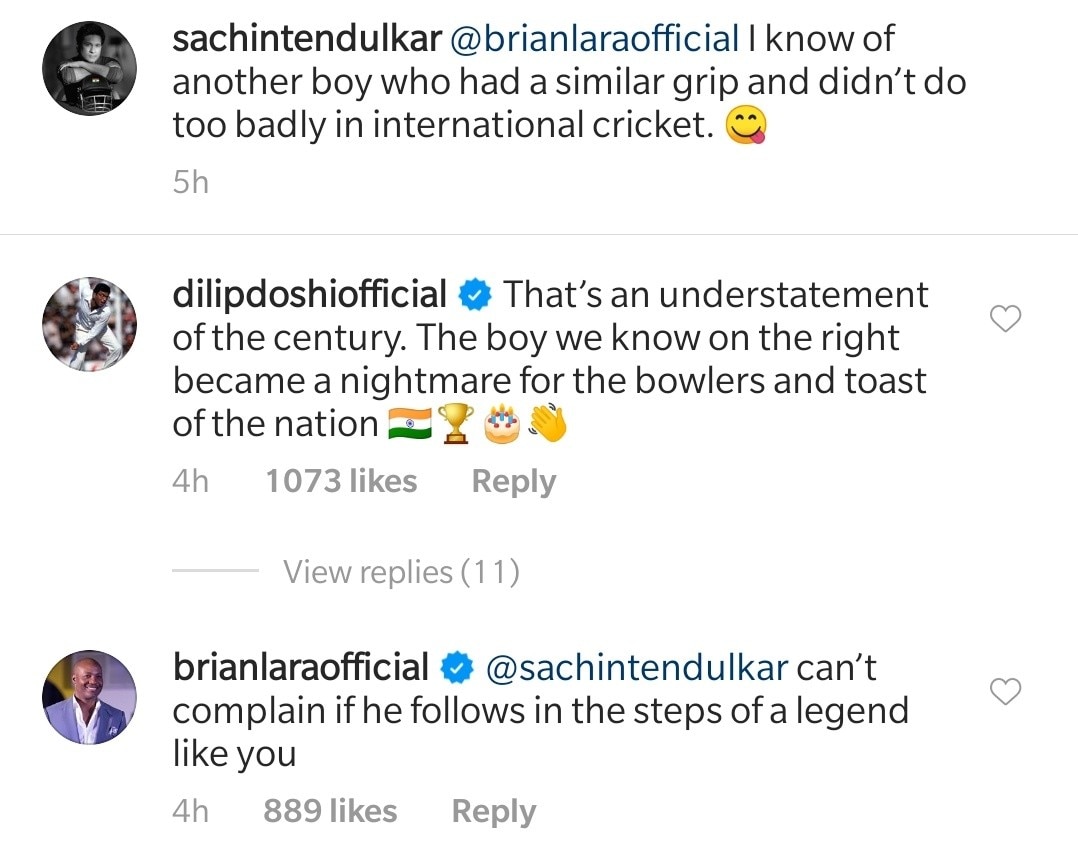 Sachin was enamoured by Lara’s humility and replied: “Thanks for the kind words Brian. He is going to be learning from one of the greatest batsmen in the world who also happens to be his dad, and my friend. #leftandright.”

Former Indian cricketer Dilip Doshi also praised Tendulkar: “That’s an understatement of the century. The boy we know on the right became a nightmare for the bowlers and toast of the nation.”

Last month, Lara said that Tendulkar’s unbeaten 241-run knock against Australia was the most disciplined and determined innings of his Test career.

Tendulkar, who made his debut in the longest format of the game as a 16-year-old, finished his 24-year-long career as Test cricket’s highest-run scorer.

“Can you imagine playing Test cricket at the age of 16 until the next 24 years. That is just unbelievable. Sachin has played some amazing innings throughout his career but none with more discipline and determination like his 241* against Australia at the Sydney Cricket Ground (SCG),” Lara said in an Instagram post.

Citing the example of Tendulkar’s innings, Lara asked everyone to show discipline as the world battles COVID-19.

In 2004, Tendulkar scored 241* off 436 balls against Australia and this enabled India to post a mammoth score of 705/7 in their first innings.

The match ended in a draw but the concentration and dedication Tendulkar showed will remain alive in the minds of the cricketing fans.

A computer science graduate with an avid interest in sports primarily cricket and football. My hobbies include drawing, reading and playing video games.A self learner and innovator.

Vijay Mallya delayed for extradition over past settlements

Dil Bechara’s trailer has every fan pumped up on their…