“It was great to play against you Finchy,” Virat Kohli sends good wishes to Aaron Finch after veteran announces ODI retirement

Australian veteran Aaron Finch is set to retire from the One-Day Internationals format, after concluding the New Zealand series, as announced by Australia Cricket. . The men’s T20 team will continue to be captained by Finch, who has participated in 145 ODI games with 54 of them as captain.

The 2015 World Cup champion, Finch, made his ODI debut in 2013 and scored 5041 runs at an average of 39.13, with 17 hundreds and 30 fifties. But the Australian opener has recently struggled with a string of poor performances.

“It has been a fantastic ride with some incredible memories,” Finch said. “I have been extremely fortunate to be a part of some brilliant one-day sides. Equally, I have been blessed by all those I have played with and the many people behind the scenes.
“Well done finchy. It was great to play against you all these years and with you as well at rcb. Enjoy the next phase of your life to the fullest,” Kohli commented on Finch’s Instagram post. 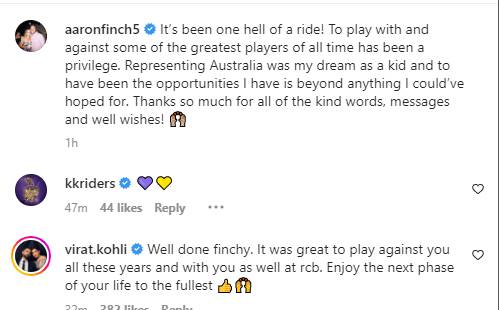 T20 World Cup for Blind to kick start on December 5

Rahul Gandhi is unlikely to attend the winter session of…

Top of the table: Premier League supremacy for Arsenal

Bigg Boss 16: Netizens are angry on no Shukrawaar Ka Vaar;…