Genghis Khan: A vicious Barbarian or a Unifier who brought modern reforms into the world

Genghis Khan, a brutal barbarian who slaughtered millions, but his real character was far more interesting. He was the man who brought law and civilization on his land.

Genghis Khan, original name Temujin was born in 1162, near Lake Baikal, Mongolia and died in 1227 at the age of 65. It is believed that he was born with a blood clot in his fist foretelling that he was destined to be a legendary warrior. His father was a tribal warrior chief who was poisoned by rival tribe that led to his death when Genghis Khan was nine years old.

He had a harsh childhood

The man who became a legendary warrior and ruled the empire actually had a very unpleasant and rough childhood. After the death of his father, Genghis Khan was left behind as a destitute child. He and his mother along with his 7 siblings were expelled by his own tribe.

At the age of 16, he and his wife were abducted by rival clan. However, he was able to escape the slavery. All the hardships and struggles turned him into a warrior and leader.

Who was Genghis Khan?

Genghis Khan was a Mongolian warrior who consolidated the nomadic tribes of Mongolia under him into a rigidly disciplined military state and a powerful nation, extended his empire across Asia to the Adriatic Sea. Hence, Khan found Mongolia Empire. 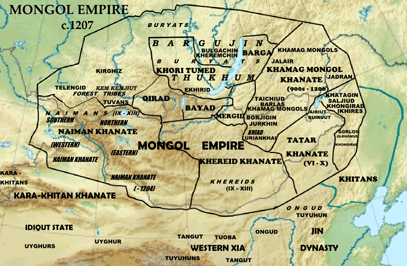 But, how did he transform vulnerable Mongolia into a powerful nation?

Mongol Empire was founded in the year 1206 by Genghis Khan originating from Mongol, central Asia and later on stretching across Pacific Ocean and eastern Europe. By the 13th and 14th century, Mongol empire went on to become largest contiguous empire in history. Genghis khan not only included tribes from Mongolia but also tribes from Asia including Korea, Japan, China, Pakistan, Kuwait, Iraq and some parts of Russia.

His physical appearance is still unknown

Despite being a renowned figure, his appearance is still unknown. Most of the records describe him as tall, with long flowing hair, and bushy beard. Perhaps according to the 14th century Persian chronicler Rashid al din, Khan had red hair and green eyes.

The great khan was responsible for the death of over 40 million people. Which is more than the total number of people killed under the regime of Joseph Stalin and Adolf Hitler. The Khan, irrevocably destroyed the whole empires. He felt that brutality was a good way to keep people under control.

Genghis was proud of his murderous rampages and believed the terror should be helpful in enemies to join his side instead of losing any of his men. Which is why most of the men in his army were his former defeated enemies.

The Khan valued merit and loyalty instead of noble standing which helped him to grow his army. He turned his dangerous enemy archer, named Jebe into his long-term ally. It is believed that, once during a battle, an archer shot Genghis khan’s horse which nearly killed The Khan himself. The khan was very impressed with the archer for admitting. Thus, kept him in his army as a commander.

The Khan was tolerant of different religions and cultures. Unlike other emperors, he embraced religious and cultural diversity. Genghis Khan liked to read about different religions. He practiced secularism and passed many laws giving religion freedom to its people. The Mongols also had an exceptionally liberal attitude towards religion. The Great Khan also had interest in spirituality.

Women were given rights in the Mongol Empire. Women could own and inherit property, were involved in religious ceremonies and could be shamans, and the wives of senior tribal leaders could voice their opinions at tribal meetings.

Genghis Khan created one of the first international postal systems

Apart from the weapons and horses, Mongol Empire had a huge network for communication. From the earlier accounts, The Khan was involved in the formation of mounted courier service known as the “Yam.” This medieval express consisted of a well-organized series of post houses and way stations strung out across the whole of the Empire. He also modernized Mongolian culture by adopting the Uyghur script as a writing system and by creating the Yassa code of law

The cause of death and site of burial are still unknown

The traditional narrative says he died in 1227 from injuries sustained in a fall from a horse, but other sources list everything from malaria to an arrow wound in the knee. Some accounts also claim that he was castrated by a Chinese princess in retaliation to the rape he committed on her.

The Khan took great pain to keep his burial place as a secret. It is believed that people related to his burial in any way were executed. But till date, the precise location is unknown.

Today, Genghis Khan is very popular among Mongols. His face appears to be on almost every product. He is regarded as the father of Mongols.

How did a nameless & formless Himalayan Yogi controlled the NSE?

Lock Upp: Kangana Ranaut opens up about an incident of…

IPL 2022: Rishab Pant been dismissed by Jasprit Bumrah most…