In another case of WhatsApp forwards announcing news before media portals a viral message claims that the central Government is providing Rs 1.5 lakh to every Municipal Corporation per every COVID-19 patient, so the Corporation along with private doctors are increasing the COVID-19 cases 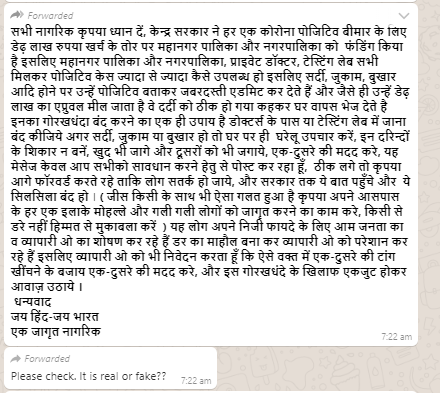 “The Central Government has declared Rs 1.5 lakh per COVID-19 patient to the Municipal Corporations. So, the people are requested to stay vigilant as Corporation and private doctors are declaring even a person with normal fever or a cold or a cough as COVID-19 positive (Translated from Hindi) ” reads the forward.

Claim: A message circulating on #WhatsApp claims that Central Government is providing Rs 1.5 lakh to every Municipality for each #COVID19 patient. #PIBFactCheck: The claim is #Fake. No such announcement has been made by Government. pic.twitter.com/Ntr137aIUY

The claim is FALSE. No such official announcement from the government or news reports could be found. Earlier a similar message was being circulated in Marathi. When that message reached the Vasai town in Thane district in the Indian state of Maharashtra, the residents had refused to get tested.

Republic Day celebrations to begin from January 23 every year

Usman Khawaja to open for Australia in the final Ashes Test

Bigg Boss 15: Shamita Shetty stands by Pratik Sehajpal as he…