Shah Rukh posted a video of the squad celebrating their victory on Instagram. In the post’s caption, he wrote  “Every victory is special….but somehow this one for @tkriders Women’s Squad is well, most special. Well done girls you are all so beautiful and amazing. Yay!!!”

Aryan Khan also sent the squad his congratulations on his Instagram Stories. He posted a picture of the victorious squad holding the trophy. The caption on Aryan’s post said, “First women’s CPL tournament and the first win already secured. Congratulations ladies! Hopefully, many more to come” 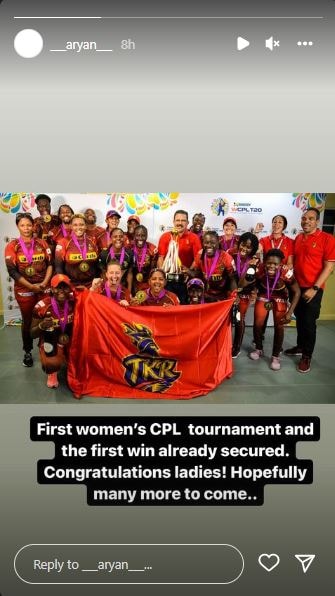 Earlier this year, Shah Rukh expressed his happiness that the first-ever women’s squad had joined his Knight Riders organisation. He tweeted on the Trinbago Knight Riders’ announcement and added, “This is such a happy moment for all of us at @KKRiders @ADKRiders and of course the lovely set of people at @TKRiders. Hope I can make it there to see this live!!”

Shah Rukh is currently getting ready to return to the big screen after more than four years. The actor most recently appeared with Katrina Kaif and Anushka Sharma in his 2018 film Zero. He will appear in Pathaan, a film directed by Siddharth Anand and starring Deepika Padukone and John Abraham. His current project is Jawan, a movie directed by Atlee. In development is Dunki, starring Taapsee Pannu and directed by Rajkumar Hirani.

OPPO A58 5G: Check out the price in India, specifications…