Actor Kamal Haasan tested positive for the coronavirus after coming from his US trip, shares on his Twitter.

Actor Kamal Haasan took to his Twitter handle on Monday to share that he has tested positive for Covid-19 and is quarantined in a hospital currently. Along with this, he requested people to stay safe since the spread isn’t entirely over yet. In Tamil, the actor wrote about him getting infected by the coronavirus. Just after returning from the US, he revealed he had been running down with a slight cough. 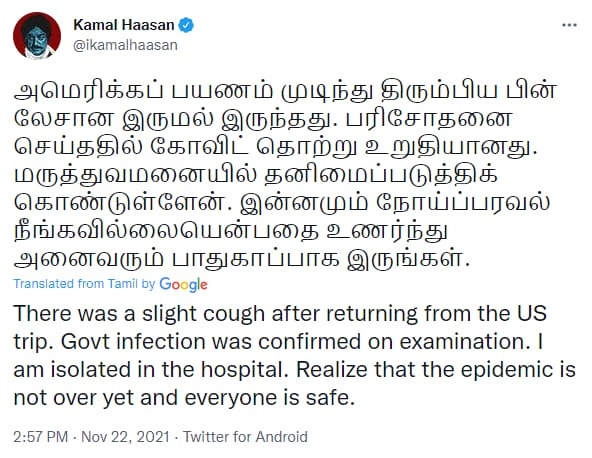 His Tweet’s translation read, “There was a slight cough after returning from my US trip. Government infection was confirmed on examination. I am currently isolated in the hospital. Realize that the pandemic is not over yet and everyone is safe.”

The actor is currently occupied with his shoot of an upcoming Tamil action flick, Vikram. From the sources of the Hindustan Times, it has been known that the film marks the maiden collaboration of Kamal Haasan and director Lokesh Kanagaraj. This film also sees the appearance of stars Vijay Sethupathi and Fahadh Faasil as the antagonist of the film. Rumouring Kamal Haasan to be playing the role of an agent, the movie marks an action film.

On the other hand, the actor lately confirmed that he’s also writing a script for Malik director Mahesh Narayanan. Kamal confirmed the collaboration without revealing too many details regarding the film.