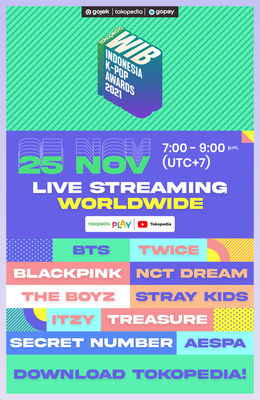 WIB: Indonesia K-Pop Awards is an awarding event from Indonesian communities for the aforementioned global megastar groups whose fans have voted through Tokopedia.  The WIB Indonesia K-pop Awards 2021 will be the first award show dedicated to K-pop fans in Indonesia, and will also present various special performances from the groups.

Worldwide communities can stream WIB: Indonesia K-Pop Awards on 25 November from 19.00 to 21.00 Jakarta Time (UTC+7) via Tokopedia Play within Tokopedia’s app and Tokopedia’s official Youtube channel. Fans can watch the show through the following link and are encouraged to set reminders as to not miss out the premiere.

“In addition to connecting K-Pop fans in Indonesia and around the world with their favorite global megastars, we hope to maintain Tokopedia’s relevance and bring Indonesia’s name to the global stage,” said CMO and SVP of Tokopedia, Kevin Mintaraga.

Tokopedia’s WIB campaign is routinely held every 25th to the end of every month. Indonesians can find a variety of products with various attractive offers to make shopping more efficient.

Tokopedia, as an Indonesian technology company, has a mission to democratize commerce through technology. Tokopedia’s vision is to build a Super Ecosystem where anyone can start and discover anything. To this day, Tokopedia has empowered millions of merchants and users across the marketplace and digital goods, financial technology and payment, logistics and fulfillment, including Mitra Tokopedia.

Disclaimer: The above press release comes to you under an arrangement with PR Newswire. Business Upturn takes no editorial responsibility for the same.

BingX Partners Up with Sumsub to Enhance its Compliance & KYC

Karishma Tanna to tie the knot to Varun Bangera on February…

Vaani Kapoor opens up on intimate scenes being difficult for…

Bigg Boss 15: Rashami Desai’s brother gives it back to…

Manish Malhotra’s get-together is all about glitz and…