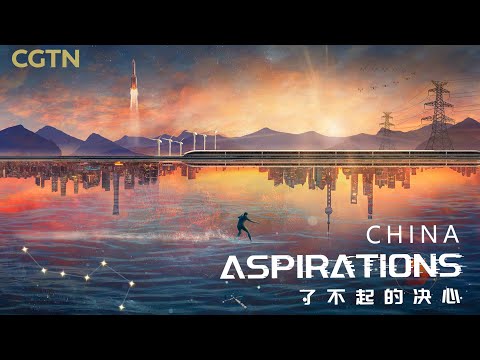 BEIJING, Nov. 30, 2022 /PRNewswire/ — After China’s 20th National Congress, the country’s roadmap for the future has been the main focus of the international community. China Aspirations offers a fresh interpretation of how China’s change over the years is set to shape its vision for the future.

Presented by CGTN, the four-part docuseries premieres on November 24 globally. China Aspirations will take the audience on a journey across the world, from the birthplace of Chinese civilization to the cradle of China’s quantum technology. From the ancient Hindu temples of Nepal to the great Savannah of Kenya.

Following the lives of 24 groups of individuals, including nuclear fusion scientists, iron-armor craftsmen, elephant guardians, animators, policy makers and doctors etc., the docuseries uncovers clues behind the country’s remarkable change in the past decade by documenting the lives of the individuals who have helped shape the current landscape of China.

China Aspirations dismantles the conventional narrative of China by showcasing the vivid real-life characters that believe they should be different and can be different. How they can make the impossible possible and simply ‘get things done’, but more importantly, how they see themselves and their role as a global citizen.

The four-part series – “NEW COOL”, “MONEY STORIES”, “MARK MY WORDS”, and “INTO THE FUTURE”, will cover topics on culture, economy, governance, and global affairs.

Many say China has gone through a decade of growing confidence, which has been the cause of concern for many critics and politicians. But for the generations growing up in the past decade, this change is now an intrinsic part of their life and they take pride in rediscovering their heritage and reviving lost traditions.

China Aspirations showcases the rippling effect brought by this new generation by taking a unique approach from the perspective of a romantic, heroic, and legendary poet in the Chinese history.

Song Ci poem, a special form of China’s musical poetry, has greatly influenced the Chinese people’s spiritual world for over a thousand years. Working with a group of artists dedicated to bringing back the lost form of art, the docuseries, for the first time ever, has been able to re-create the lost tune of one of the most famous and influential Song Ci poems for the modern world to see.

The series also unveils the secrets behind China’s fastest-growing city, at a speed almost unheard of in most parts of the world. And how the world’s first IPO quantum tech company operates after several rounds of U.S. sanctions.

China Aspirations explores the new driving forces behind the world’s second-largest economy on the transition to a high-quality development mode, while listening to the voice of a new generation embracing change to accomplish their dreams.

The full series and short clips will also be available on CGTN’s official website, APP and social media handles after its premier on CGTN.

Disclaimer: The above press release comes to you under an arrangement with PR Newswire. Business Upturn takes no editorial responsibility for the same.

Boost brain function and memory power with a balanced diet